Choose how you wish to pledge:
CREDIT CARD
PAYPAL

All shipping & handling costs are included in the prices!

Our album NEW WORLD will be released in December 2021, followed by a world tour, and preceded by 5 singles, each with a music video. We need your help to make this happen!

16 Aug 2021
Listen to the "Legend of the Bird" demo and to Aor's message to all our  fans and supporters! 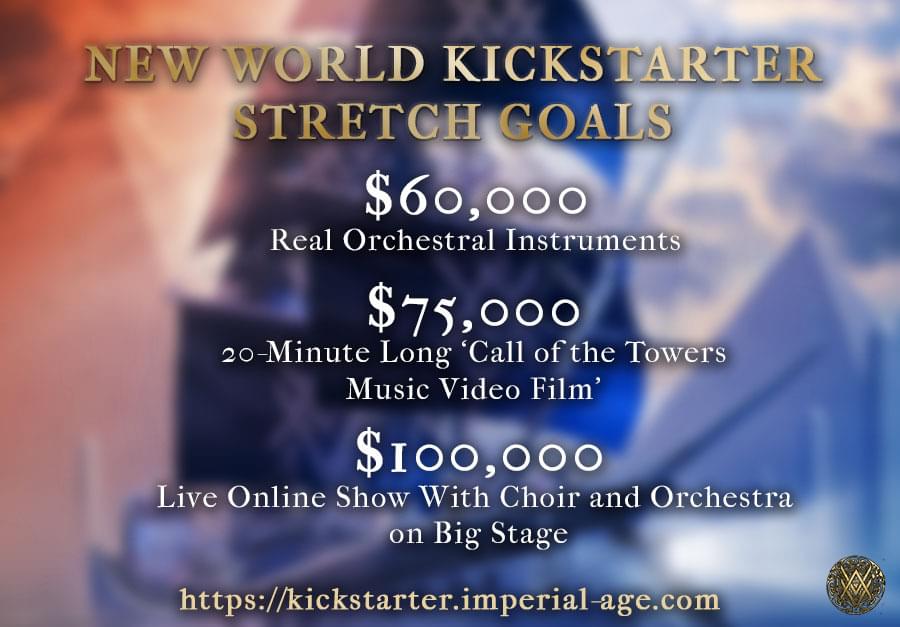 With your GREAT support, we have already successfully reached 114% of our $40,000 goal to produce our album ‘New World’ and film 5 music videos. And since we have 10 more days to go, we announce the new STRETCH GOALS!

We have already mentioned that every cent you give us as part of this campaign will be used to increase the quality of the production, but we decided to make it more concrete and tangible. So here it comes!
$60,000 - Real Orchestral Instruments on the album
So far we have always worked with orchestral samples (as most symphonic metal bands and film productions do these days). A real orchestra is expensive, but prices have dropped recently and we have good friends, so we can pull this off, provided you pledge us enough money.
$75,000 - Twenty Minute long ‘Call of the Towers’ music film
‘The Call of the Towers’ is the epic 20-minute backbone of the album, the intro to which you can hear playing in the main kickstarter video. We have a GREAT idea (and screenplay) for an EPIC 20-minute long music video with film elements, but you can guess the budget. However, with your support at this stage we can do it - and we have the right film crew capable of working at this level.
$100,000 - Live Online show with Choir, Orchestra and big stage production
Imagine an live online show which is not a fancy pre-recorded load of graphics as many bands do these days, but a REAL, LIVE SHOW, on a BIG stage, with MASSIVE production, a full ORCHESTRA and CHOIR - and all of it TRULY IN REAL TIME with YOUR COMMENTS broadcasted on huge screens! Thats what we want to do as soon as January - as a worldwide presentation of New World right before our tour kicks off.
Are you with us? Can we do it? Lets go!! 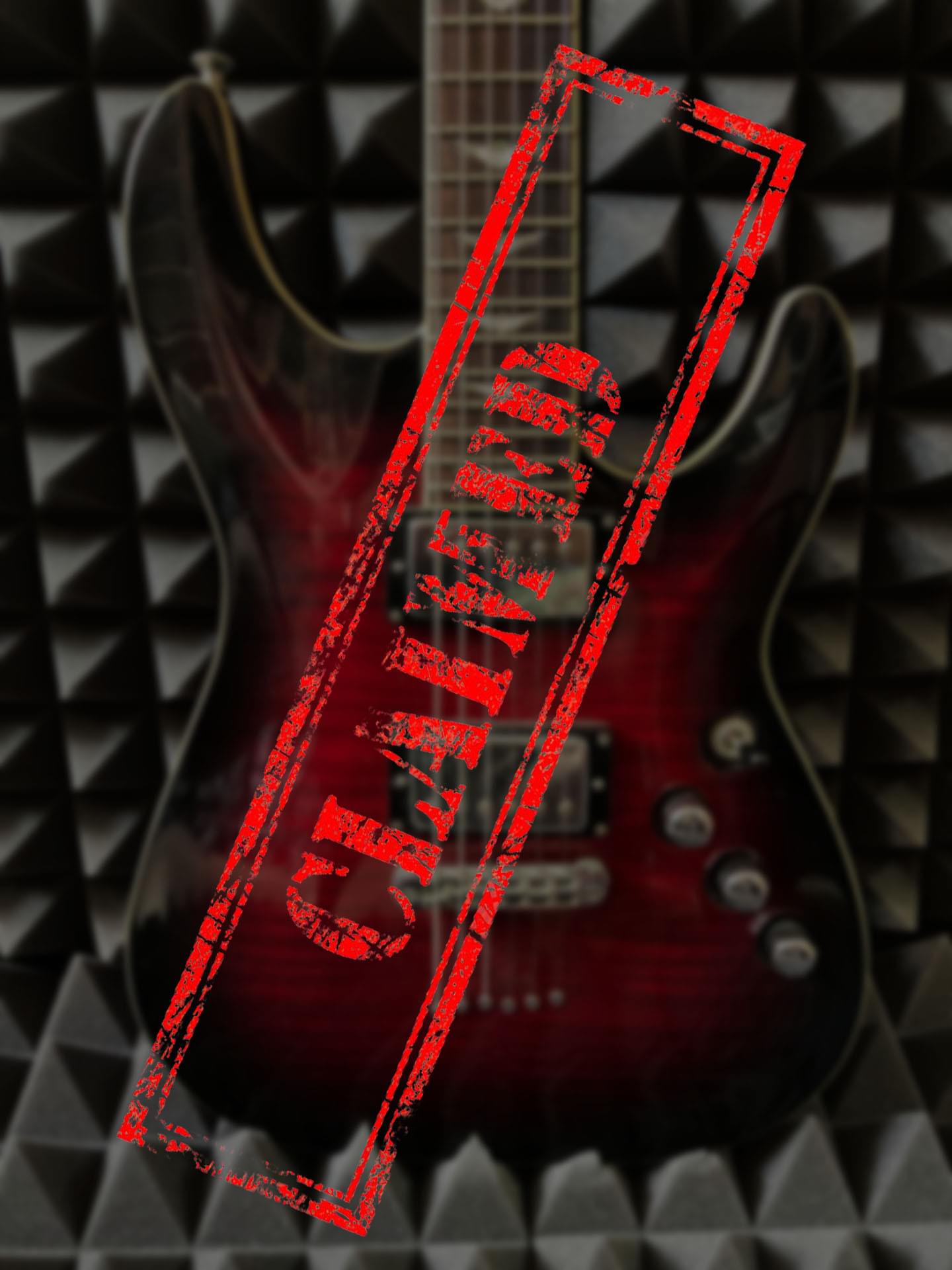 Hi everyone! It's Paul Maryashin of Imperial Age here and we have something special for you!
First, I would like to thank every one of you for such a huge support during our crowdfunding campaign. Couple of days ago we've reached 100% and surpassed it! That's incredible!
So time has come for some special rewards! And today it will be my own guitar - Schecter Diamond Series C-1 Plus - which I used to play on our Live on Earth online show! It sounds 100% metal and has everything you need for pretty much any kind of music! The guitar is in supreme condition, and has been well looked after.
The reason Im giving it to our kickstarter is because I bought myself a guitar with a longer scale that fits better for playing our solos (which often involve high notes).
So now this instrument is waiting for its new owner! If the owner wants it, I can also sign it for him/her.
Once again thank you for your amazing support!
Stay metal!
-Paul

07 Aug 2021
This is a great event for us, and today is celebration time! We love you guys!!! No record label would ever pledge this amount to us (and they would only do it as a loan anyway).
We are endlessly thankful to our huge army of fans worldwide for supporting us with your faith and hard-earned money, especially during this difficult period. We will do our best to live up to your trust!
And now is the time for STRETCH GOALS!! We said in the beginning that $40,000 is the bare minimum, and that the real fun begins AFTER we breach this threshold!
Watch the video where we explain what these stretch goals are and where the money above the initial 40k will go. PLUS, this video has ANOTHER NEW SONG DEMO IN IT!

06 Aug 2021
In this video our close friend Ilya Guryanov (PhD in philosophy and history of medicine, associate professor at the Institute for Social Sciences, RANEPA, research fellow at Poletayev Institute for Theoretical and Historical Studies in the Humanities, HSE) - an ardent swimmer - has swum almost a full nautical mile (1500 meters) in support of our upcoming album ‘New World’ Kickstarter!

It took him almost 50 minutes to swim across a sleeve of lake Seliger (North-Western Russia), 1.5km over fresh water from our camp to the opposite shore, without any rest.
Aor, Jane and Anna, together with Ilya’s 6-year-old son Severin, accompanied him by boat for safety.
Enjoy the epic scenery, the bravery of one man, and the overall positivity of this video!
And last but not least - this video contains NEW MUSIC!!
The soundtrack is a demo version of a new song from the upcoming album, never published before!
Help us make a perfect album together with 5 new music videos!
The main goal of $40,000 has already been reached by more than 98% and now we are rolling out new stretch goals - so that we can add immense CGI and graphics into our videos, more and better production for the music and a huge online New Year show before the New World Tour kicks off in January!
Thank you for you support!!
We love you!!
\m/
Ilya Guryanov is also an executive committee member at the ‘University Solidarity’ Interregional Trade Union of Higher Education Employees (Russia) and an editorial board member of ‘Platonic Invastigations’ - the main Russian peer-reviewed journal in the field of the Platonic tradition.

We have been struck by a tornado (never seen before in these parts) and are very happy to have survived it!
Since we were dealing with the aftermath of the destruction and couldn’t be revealing more interesting details that we wanted to as part of our crowdfunding campaign (which has by the way already reached 96% of its $40,000 goal) we decided to EXTEND THE CAMPAIGN BY 7 DAYS - UNTIL 22ND AUGUST 2021!
Read full story + see all pictures here. 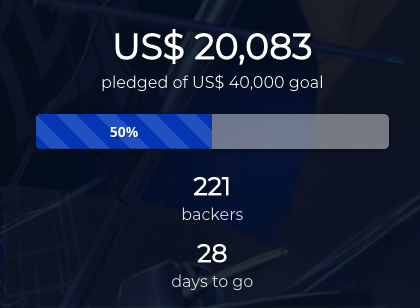